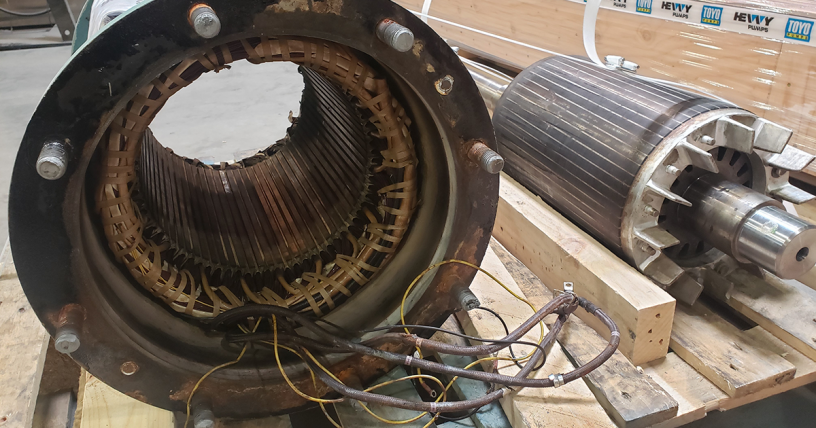 Whether it be a submersible pump you already own or a used pump you are looking to buy, it is important to know the condition of the electric motor. A few quick checks can save you a bunch of time and or money.

The most common problem in a submersible pump motor is water ingress. Whether it be entry though damage to the electrical cable, motor housing or seal system the results are the same. Water and electricity don’t mix well and most often end in what is referred to as a phase to ground fault. When this happens electricity normally contained within the motor windings “leaks” through damaged electrical insulation within the pumps motor and reaches the motor case/ ground circuit.

Fortunately for pump users the slow ingress of water does not immediately result in a catastrophic failure but does cause the winding insulation to weaken, which in time eventually does result in a major motor failure.

If a phase to ground leak has resulted in a catastrophic failure there will be little to no electrical resistance between the power conductor and the pump ground circuit. This is a clear indicator that the insulation at one or more points has completely failed. This type of failure can often be detected with an inexpensive multimeter or ohmmeter. A reading of zero ohms (or close to it) on the lowest setting clearly indicates a major problem. (see below)

If the insulation is only weakened but basically still intact, the applied voltage from a multimeter is not sufficient to detect a problem. To detect this condition a much higher voltage must be applied. Insulation resistance testers generate much higher voltages, up to 1000VDC or more. These instruments are often referred to by the brand name ‘Megger’, but are available from many different test equipment manufacturers.

Higher test voltages can generate leakage currents large enough to yield much more accurate results than a multimeter. Found early, motors with low readings can often be disassembled, dried out, and re-dipped to add extra insulation. This is far more cost effective than a full rewind. Below is a picture of a modern Insulation resistance tester and beside it an older crank-powered one. 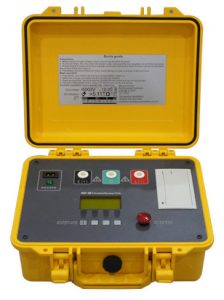 Insulation resistance testers often feature multiple ranges, such as 300V, 500V ,750V, or 1000 volts. To apply a test the general rule is to determine the motors normal operating voltage and choose the next higher scale. (eg, for a Megger offering the four voltages listed above, use the 750 volt scale for a 575 volt motor.) Ideally, you want a reading of a few gigaohms or more, but I’ve personally installed 575 volt motors with 750 megaohms resistance to ground and had no problems. This value will decrease as the motor ages.

A SAFETY NOTE. HIGH VOLTAGES IN USE!!! STAY DRY AND DO NOT TOUCH THE ELECTRODES OR ANY PART OF PUMP WHILE TESTING WITH A MEGGER!!!

When looking to test a submersible pump motor, first test the unit with the electrical cable still connected at the pump end but completely disconnected from the power supply. If a fault or weakness is found, separate the supply cable from the pump by opening the pump and disconnecting the motor winding leads from the cable conductors. Check the motor and the cable conductors separately, you may be lucky and have a good motor and only have to re and re the cable.

Just to be clear, the phase to ground test described in this blog will identify 90% of the faulty or weak motors, but only a well equipped rewind shop can perform complete testing of a submersible motor.

Should you need hands on support with a motor problem, or for that matter any pump problem please give us a ring. We are here to help!!