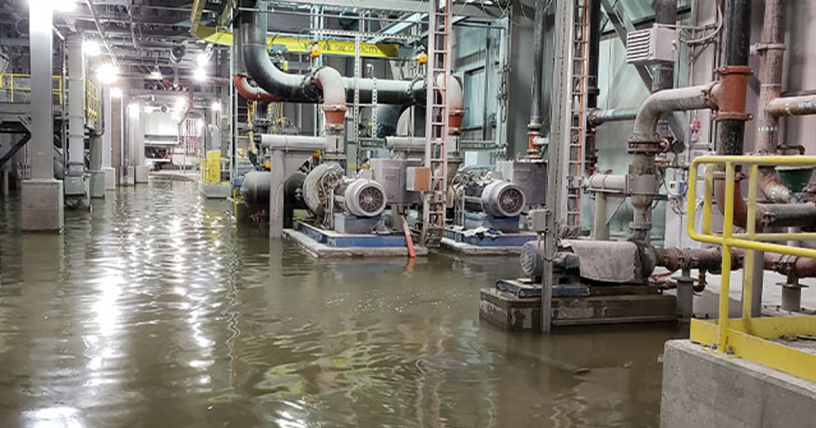 One of a pump operator’s worst fears is a plugged pipeline. Some believe this to only be a concern when dealing with extremely heavy slurries but this is far from the truth. Today we will discuss several causes of plugged lines and how to avoid these highly expensive and time-consuming problems.

Is the most common form of pipe plug. It stems from insufficient pipeline velocity (flow rate) to maintain solids in suspension. Generally it manifests slowly and can be avoided by monitoring flow instrumentation or energy consumption. Upon identification of a problem developing, the operator can correct the issue by flushing his line and increasing the flow rates. This will also help to avoid a reoccurrence. (see image below)

Are a gradual build-up of concentric deposits that, if viewed in section, resemble the growth rings of a tree. It is an insidious problem that quietly manifests itself over long periods of time. (see image below)

Growth rings are most commonly associated with slurry systems that are transporting very fine particles.  Lime slurries would be a classic example of this. Every time a lime system is shut down, a thin coating of the lime is left deposited on the walls of the pipe. If the system remains shut down for long enough, the product will dry and a growth ring is formed. This will continue to happen each time until multiple growth rings are present.

System designers are generally aware that specific products/solids have a tendency to “plate out or build up” and form growth rings. They avoid the formation of growth rings by adding a flushing procedure as part of any shutdown operation.

In cases where preventative flushing has not been added to the shutdown operation, operators will observe a very slow increase in system back pressure. In most cases, chemicals can be added to reverse the growth and “pigs” can also be utilized to clean the line. However, sometimes line replacement is simply the best solution.

Is very similar to growth rings but does not necessitate a fine product that can coat the entire inside of the pipes surface. Instead, it is created when any product with a hardening factor is not flushed out over time, but is left to solidify in thin layers on the bottom of the pipe. (see image below)

Detection, prevention and corrective action are the same as with growth rings for this issue.

A pipe line which is not flushed relies on proper grading and very low solid settling velocities to stay “clean.” If either of these prerequisites are not met, problems can result.

If the grading is close and/or the product has a reasonably high settling velocity, partial blockage is highly likely. If the system is restarted before the product can harden, re-establishing the flow, the problem will normally be corrected. (see image below)

If the grading is poor and the product has the ability to sluff, solids can move into low spots in the pipeline and completely block the pipe. In many cases, restarting the system will not reestablish flow and you will have a plugged pipeline.

Continuity of flow in any system relies on a balance. At any given time the TDH (total dynamic head) output of the pumps must be able to match the resistance imposed by the flow through the piping system. In slurry systems, that balance must also be maintained with a flow that supports  velocities above the critical settling velocity.

When a pump suddenly ingests a very high level of solids, it is close to starved of liquid. As such the pump and the pipe immediately attached to the pump are saturated with solids. The impeller vanes, now plugged with solids, fail to provide liquid flow and pressure. At the same time the system head, due to the high concentration of solids within the pipeline, skyrockets and flow stops.  This sudden plugging of the line is referred to as corking the line (or pump) and is most commonly associated with a cave in on submersible dredge pumps. It can also be a result of over feeding solids or underfeeding liquids on process pumps.

A pipeline which is not perfectly graded (most pipelines are not) and completely drained can have “Bottom Ice” problems if restarted in cold weather.  This is an issue for both water and slurry systems. (see image below)

Properly graded and drained pipelines still tend to have portions of the pipe where there is some residual liquid. This liquid pools in the bottom of the pipe and will freeze in extremely cold conditions. If the ice is gradually released into the liquid stream, there is little effect on the system.

I have however visited a site where this was not done. In an effort to make sure any potential frozen portions of the pipeline could be cleared; a hot liquid was rapidly diverted into the empty pipe.  The thermal shock immediately dislodged the half-moon chunks of ice that were attached to the bottom and instead of quickly melting, they formed a 100-meter-long ice jam. Unable to establish flow, the entire portion of the pipeline between there and the pump froze solid in the subzero weather. The pipeline was then abandoned until the spring thaw.

We have not covered all the potential ways in which pipelines can be plugged, but there is however a common thread within the ones we did discuss in this article. That being: “good systems planning can avoid almost every plugged pipeline”.

Plan out your system, have good operating procedures in place and, above all, don’t hesitate to ask for professional help.