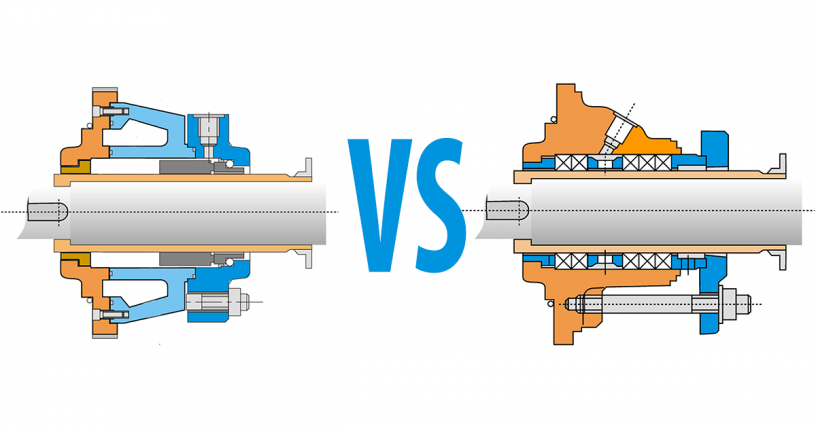 When discussing slurry pump seal support plans it seems that the terms “Flush” and “Quench” are often confused and or misused. With the concept being slightly different for mechanical seal boxes vs packed seal boxes I will separate these, discussing each in turn.

The basic mechanical seal flush plan is very simple. It calls for a clear/clean liquid, usually water, to be introduced into the space between the actual seal and an impeller side exit restriction. The flush liquid is introduced at a pressure above that of the pumpage, thus assuring a positive outward flow/flush and a clean operating environment for the mechanical seal. This is illustrated below.

The definition of a flush is a “fluid which is introduced into the seal chamber on the process fluid side in close proximity to the seal faces and typically used for cooling and lubricating the seal faces.

When flushing is required, Toyo recommends the use of an API plan 32 seal piping arrangement as it is better suited in services containing solids or contaminants which could damage the seal faces if recirculated in the flush media.

The Plan 32 typically uses a clear clean fluid supplied from an external source delivered to the primary seal faces on the process fluid side of the seal. With the use of a close-clearance throat bushing, the stuffing box can be back pressured to an elevated pressure ensuring the flushing fluid will not flash across the seal faces.

A quench plan, as the name indicates, is designed to quench or cool the seal. It is normally used if short periods of dry running are expected. As illustrated bellow, the fluid is introduced into the area between the back of the seal faces and the close fit exit on the drive side of the pump.

API 682 3rd Edition defines a quench as a “neutral fluid, usually water or steam, is introduced on the atmospheric side of the seal to retard formation of solids that may interfere with movement, or for other purposes.” 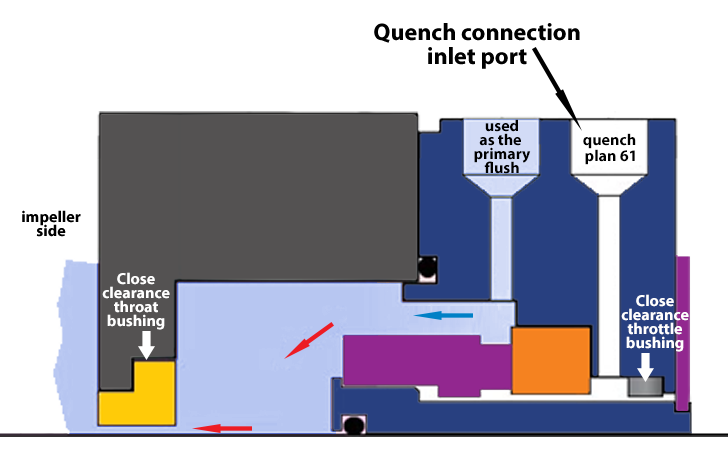 Some quench seal plans replace the close fit exit restriction with a secondary seal and a top exiting port that can be plumbed to capture the spent quench fluid and route it away from the rotating assembly. The principal is however just the same, we are trying to cool the seal not in any way flush the seal.

Cautionary note: A common mistake is to over-pressure the box and damage the expensive mechanical seal.

The primary goal of all flush water plans is to preclude the pumpage from contaminating the seals. As such flush water plans for packed boxes are very similar to that of mechanical seal boxes. However, as illustrated below there are some obvious mechanical differences. The most striking difference is the addition of a seal (packing) located between the injection port and the exit restriction. This minimizes the volume of flush liquid consumed. 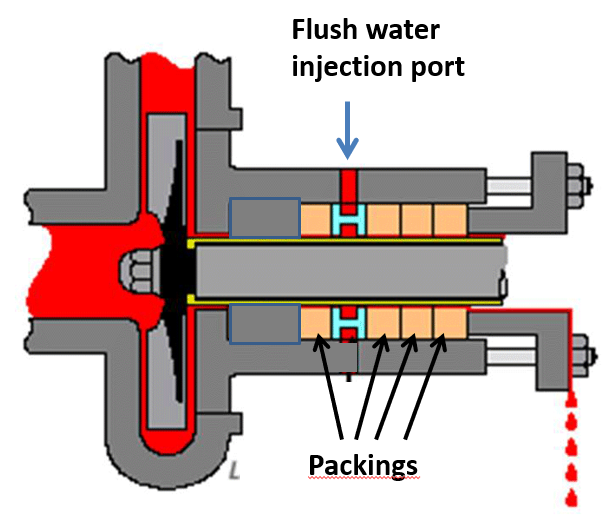 From an operational standpoint, the packed box differs as it requires some leakage to assure lubrication and prevent heat build-up. The mechanical seal box should have no leakage.

When working with a packed box, whether it be a flush, the rule of thumb for setting water pressure is the same. The pump shut off pressure, plus 10% or plus 20 psi, which ever is greater. There is however a difference in how flow rates are set.

With a standard flush plan, flow is typically adjusted by compressing the packing until a few drops are observed leaking out of the seal on the drive side. On a quench plan, flow rate is set by adjusting an inlet valve while at the same time using a valve on the exhaust side to maintain the correct seal box pressure. If the exit water from the seal box is too hot, flow rate is increased until exit water is cool while still maintaining the proper seal box pressure.

I hope this short blog helps clear up some of the confusion with seal flush plans. Before signing off for today, let me confirm the information provided today is general info only. Always refer to the pump manuals for specific details. If still in doubt, our applications team here at Toyo is always willing to support you in any way they can.